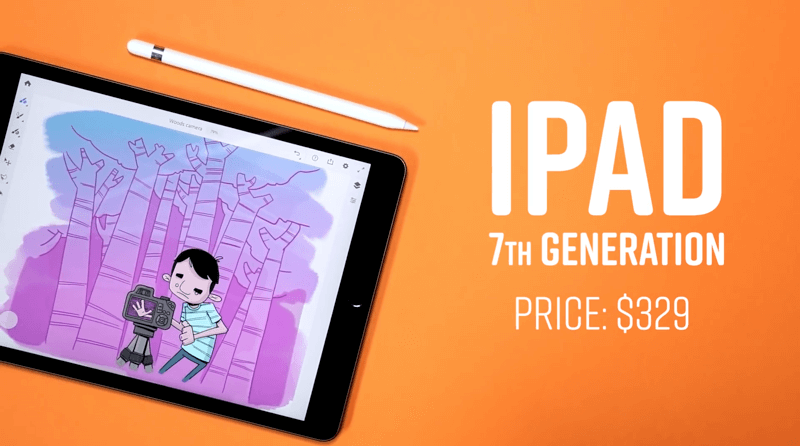 The latest entry-level iPad is a nice incremental update over last year’s iPad, but is it good enough to be your main art tool? Let’s check it out.

This is the 2019 iPad, aka the seventh generation iPad.

What’s the difference between the iPad and the iPad Air?

Well, across the board the specs on the iPad are lower than the iPad Air…

On paper, this iPad looks pathetic.

How a Windows or Mac computer uses its system resources is so much different than how iOS and iPad OS works. iOS pulls most of its system resources to the open apps and away from background processes, making the app that you’re using at any given time quick and responsive. You add this with the lighter-weight iPad apps in general, you will get really good performance.

Drawing, Procreate, Affinity Designer, and Adobe Fresco with the iPad is just as buttery smooth as it is on my iPad Pro. Except that I do get more brush lag on the newer Live Brush features in Adobe Fresco.

It’s faster on the iPad Pro for sure but this isn’t horrendous. It’s not glitching or stuttering or taking forever to render.

The crazy thing is, if you’ve ever used a large texture brush in Photoshop like a 125px brush even on an iMac Pro you’re going to see way more lag.

Apple has done a tremendous job on having their OS run buttery smooth no matter what you’re doing. At the end of the day, it’s not a bunch of numbers on a piece of paper but the experience you have using the products.

The lack of RAM also limits Procreate’s file sizes and its layers. In order to keep performance high, the larger your file resolution, the less layers you get to work with. For example, a 2732 X 2048 px canvas is going to give you 43 layers on the iPad, but 91 layers on the iPad Pro. Also because of this limitation, Procreate should run smoothly all the time.

Because there wasn’t a layer limit in Fresco, so I am trying to see if I can break this thing… However, after 20 minutes of just drawing layer after layer, I didn’t see any more lag than I was seeing in the early layers. I decided to export it and see how big the file was, and that is what finally broke this iPad and crashed Fresco. Even after I opened Fresco back up, I got the saving screen for quite a while and eventually gave me an error message saying that it couldn’t save the file.

The other thing I wanted to test out is how well is this iPad perform on Apple’s new Sidecar feature. I got to say it works just as well on the iPad as it does on the iPad pro. However, I have been using the Sidecar Beta, I’m reserving judgment until it actually comes out but so far I’m not impressed with the drawing performance. The second screen in performance is fantastic, but the actual drawing performance is kind of lacking. We’ll see what happens when it’s actually released.

32GB of storage space on the iPad could be a problem especially if you’re taking a lot of photos and videos, as far as my art file goes it’s not a huge problem. 32GB is what I had on my original iPad Pro when I got it a couple years ago. It took me about a year before filling up the entire hard drive, and then I just dumped all the files onto the cloud and started over again. I would say that the average art-style file size for me using Procreate was around 5MB to 20MB, sometimes I had really big files like 40MB to 50MB.

The only thing is that Pencil charge is better on the new one. The Apple Pencil does come with a little adapter doodad that you can plug it into a cord so you don’t have to charge it up by plugging it into the back of the iPad.

Last thing worth noting is the iPad screen is lit glass, and the Apple Pencil is plastic. It really does slide around on the glass screen, and you don’t have much drawing control there.

Let’s get to my opinion, what do I think of this?

I’m going to say the same thing that I said last year with this entry-level iPad when they brought it out with the Apple Pencil support. Dollar for dollar I think this is the best bargain in drawing tech you’re going to find. The iPad is $329 and the Apple pencil is another $100, so for $429 dollars I can’t think of anything in that price range that’s this good.

There are some pen displays that are under this price range that are pretty good, but they’re not portable. You have to plug them into your computer, and they’re only going to be as good as the computer that you’re plugging them into.

There’s some pretty good Android tablets out there with styluses, you can probably find a year old Android Galaxy or Samsung Galaxy S4 comes with a Wacom stylus. Really good hardware, really good to draw on, but I don’t think the apps can measure up to what you get on an iPad. Procreate, Clip Studio, Adobe Fresco, Adobe Photoshop is coming, and eventually you also have the Sidecar feature. There’s just nothing like that on Android.

Windows tablets at this price point I just don’t think so. If you go a little bit more expensive, you can get some really nice Windows hardware but I wouldn’t go for anything that’s under $1000.

If you’re trying to decide whether the iPad is a good fit for you:

If you just want a really clean and fun to use drawing experience that’s portable, this works great.

If you’re working on really big pieces, a lot of layers, and you’re using Procreate, I think you need to go with the iPad Pro. You’re going to get a higher resolution and more layers to work with.

I tested the iPad Mini which has the same specs as the iPad Air. I was getting just as many layers as the current iPad, but keep in mind that the iPad Air does have a better screen and a better processor.

The other thing is that the iPad here makes a lot of noise when you draw on it. If you’re one of those people who will be driven nuts by the clacking sound of your Apple Pencil hitting the screen, you probably want to go with the iPad Air. Overall, I think the 7th Generation iPad is an incredible value for the price.

Anchor Points is an illustration channel focusing on tech, reviews and generally my journey to become a better illustrator.