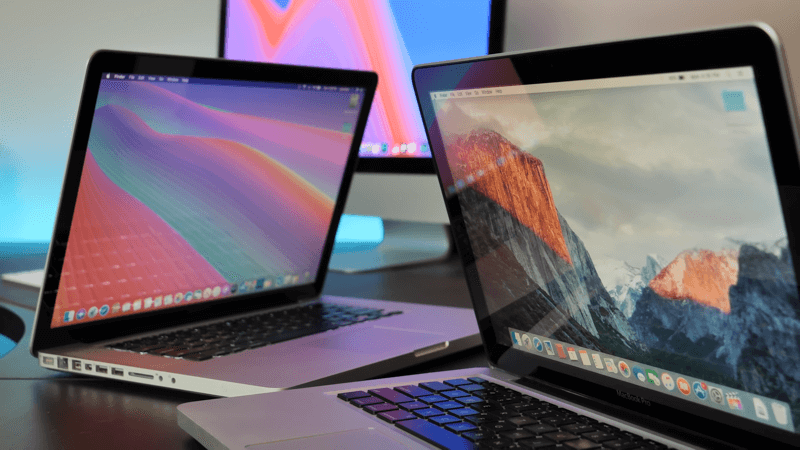 I’m going to make this the ultimate guide to buying a used MacBook.

Rather than talking through all of the individual models of MacBook and how much they’re worth, we’re gonna talk about the different use cases for a MacBook and which one you should buy at a given price point.

The first major use case that I see quite often is a budget MacOS Ultrabook. Let’s say you’re looking at a budget of under $300 what should you buy?

For most people in this category, I would recommend going for a 13-inch MacBook whether it be an Air or a Pro. The 15-inches are definitely not going to give you the best value. You probably don’t need the dedicated graphics or quad core processors if you just do internet browsing.

Now, if you start getting into the $500-$600 range, the MacBook Air has diminishing returns because you are limited by the basic processors and the less-than-stellar screen.

However, if we’re looking at $300 or $200, a MacBook Air is going to give you good value. You will get a lighter device than a Unibody MacBook Pro, and get flash storage whereas a lot of Unibody MacBook Pros in the $200-$300 price range are going to have mechanical hard drives.

If you are looking at 13-inch Unibody MacBook Pros, it’s also not a bad option because you can upgrade the storage and RAM and you have more options when it comes to those machines.

The next use case is students. A lot of students are going to encompass needs from various different spectrums and use cases that we’re going to talk about.

On a really fundamental level, most students could probably get through college just fine with a mid-2013 MacBook Air. It’s perfectly fine for typing up documents, submitting assignments, and emailing professors.

Another device that’s really popular among students and I would definitely recommend is the 13-inch Retina MacBook Pro from late 2013 to early 2015.

You can usually pick those up in the base configuration or even some decently upgraded machines for around $400-$600. You can comfortably find an early 13-inch 2015 Retina MacBook Pro for about $600. The extra screen quality makes a big difference and you’re also going to get a more powerful processor than a MacBook Air. Depending on your use case obviously, but a 2015 MacBook Pro with Retina display is definitely going to last you longer than an older 2013 MacBook Air.

Now, on the higher end of the student spectrum, I do see a lot of people that use the function keys 2017 MacBook Pro. You can get this new for about $1300 and you can get them used for under $1000. If you do have a little bit of extra cash to spend and you want to buy a more modern MacBook Pro, that would definitely be a good option.

The next category is graphic design, artistic, or any sort of creative applications. If you are shopping for a used Mac, I would say you should definitely go for a Retina. It’s gonna be a huge benefit if you can spare the $450-$500 for a late 2013 MacBook Pro. The extra screen quality and better color resolution are going to make a huge difference in your artwork.

This is also the situation where I would recommend the late 2013, mid 2014, or mid 2015 base model 15-inch MacBook Pros. Now, these have quad-core processors but they don’t have dedicated graphics. If you are in graphic design, Photoshop work, or you use a Wacom tablet, you don’t necessarily need the dedicated graphics but you might be able to take advantage of that extra screen quality. However, if you need anything that’s more demanding I would definitely recommend bumping up to a dedicated graphics model.

The final category is video editors. I get a ton of emails from people who are looking to do some video editing on a MacBook Pro on a budget.

In my opinion, if you want to have a good experience using Premiere or Final Cut on a MacBook Pro, you have to go for a 15-inch model and you should definitely go for one with dedicated graphics.

On the lower end, for about $400-$500 you could pick up a well-equipped 2012 Unibody MacBook Pro. This is going to be your best bet on the lower end because you will get Ivy Bridge processors and video graphics that are capable of 1080p video editing. Obviously you’re not going to be able to do anything too demanding like particle simulation or gaming, but it should be fine for video editing.

The step up from that at about $750-$850, I would say go for a late 2013 or mid 2014 top-tier 15-inch MacBook Pro. It comes with 16GB of RAM and dedicated graphics as standard, which makes a huge difference. The late 2013 dual graphics 15-inch MacBook Pro is, in my opinion, the best overall MacBook Pro that you could buy. I’ve recommended to several people I know, and a bunch of people that use them absolutely loves them. Obviously it’s not going to be the most capable device, this is from late 2013 so you are going to have some limitations. Editing 4K video is going to be a stretch on a device like this, if you need to do 4K video I would definitely consider going into something a little bit more recent.

If your budget is closer to $1,000, you can get a mid-2015 15-inch MacBook Pro that’s going to be very capable. The CPU performance in this can outperform the Touch Bar MacBook Pros from 2016 and 2017. The Radeon R9 M370X graphic that this machine is equipped with is definitely capable and better than the NVIDIA GT 750M that you’ll get in a late 2013 MacBook Pro. Again, not the most ideal situation for 4K video editing. Although I think if you were patient, you could get away with 4K on the mid 2015 MacBook Pro.

If you really need that 4K power, obviously a new MacBook Pro is going to be your best bet. However, you can also get a 2018 MacBook Pro 15 inch with the 6-Core i7 (stay away from the i9, it’s not necessary and you’re not going to see any performance gains). You can usually get this starting to dip below $2,000, this would be the one to go for if you need to do mobile 4K video editing. However, as I’ve always said, when it comes to video editing you’re better off with an iMac. If you don’t really need the portability, go for an iMac that will get better value.

Let’s summarize all of these different categories, and my personal pick for the best choice at different price points.

Personally, I think the early 2015 13-inch MacBook Pro is going to be your best bet in terms of getting the most use out of it.

So here are my top picks for different pricing structures, and hopefully this will give you some idea of what to look for. One thing that I would definitely recommend when you’re shopping on eBay: Figure out the computer that you want to buy first, and then search for it. If you have generic search terms like Retina MacBook Pro, you’re going to get a lot of scammy listings.

I make videos about computers that people watch. You should watch them also.